No Entertainers In My Sorties: Pacquiao 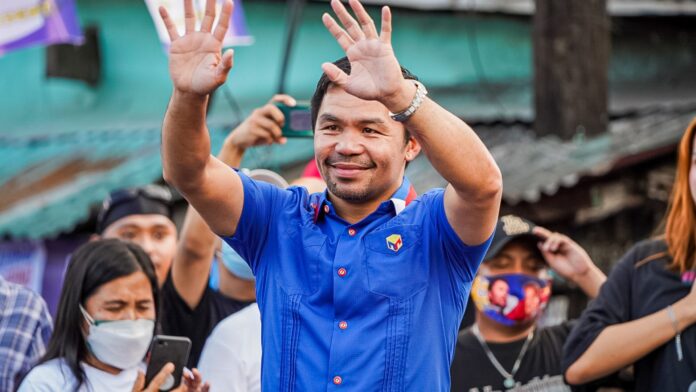 With less than 40 days before election day, presidential candidate Emmanuel “Manny” Pacquiao barnstormed areas in the Visayas, bringing his message of poverty alleviation, and will forego the usual political gimmick of tapping artists and entertainers to bring in the crowd.

Before politics, the 43-year old Pacquiao has drawn record crowds, including around 20.4 million pay-per-view (PPV) buys in his 27 years of a boxing career. Campaigning to get his platform of a no-nonsense crackdown on corruption and affordable housing for all is altogether a different thing, the former eight-division titleholder said.

“Ang ating pinunta dito ay pangangampanya at di mag-concert at di mag-imbita ng mga artista. Ang akin lamang ay marinig ako ng aking mga kababayan dito sa Iloilo kasi ang goal ko eh maipalam ko sa aking mga kasama na mahihirap na galing ako sa hirap. Gusto kong marinig ang kanilang mga hinaing at ano pa ang dapat nating tugunan pagdating ng panahon pag ako ay nanalo na (We are here to campaign and not to hold a concert and not to bring in artists. My goal is to be heard by our fellow countrymen in Iloilo and to tell them that I am one of them in growing up poor. I want to hear their travails and what we can do to help once I win),” he said.

Pacquiao was in Iloilo City on Wednesday where he met with Christian and Baptist church members as well as the provincial government officials. He also met with Mayor Jerry Trenas and with Iloilo City Governor Arthur Defensor

From Iloilo, Pacquiao is set to have a series of political assemblies in Bacolod on Friday and Dumaguete in Negros Oriental on the weekend.

According to Pacquiao, he would not try to compete with other candidates in holding big political rallies and would not resort to the so-called “hakot” system where candidates usually give payoffs just to mobilize huge crowds.