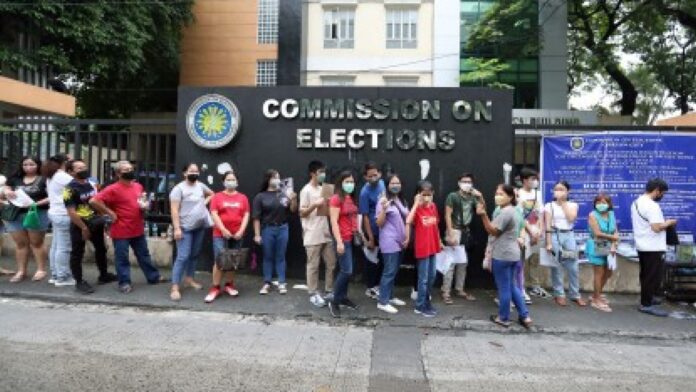 An election lawyer challenged before the Supreme Court (SC) the law resetting the Barangay and Sangguniang Kabataan (SK) elections from December this year to October 2023.

In his petition filed Monday, Romulo Macalintal asked the high tribunal to declare Republic Act (RA) No. 11935 unconstitutional and to direct the Commission on Elections (Comelec) to proceed with the polls on December 5.

Macalintal argued that the constitution does not give Congress the power to postpone the elections nor to extend the term of office of village officials because it is within the exclusive jurisdiction of the Comelec “after it has determined that serious causes warrant such postponement.”

“By extending the term of office of barangay (village) officials, RA 11935 violates the principle that the term of said officials should not be longer than their superiors,” he said in his petition.

President Ferdinand Marcos Jr. signed the law on October 10, setting the BSKE to the last Monday of October 2023 and every three years thereafter.

Any change to the term of office of village officials should apply to future elections and to apply it retroactively will “unduly curtail the freedom of the people to choose their leaders through popular votes,” Macalintal said.

The postponement, he claimed, “is a subtle way to lengthen governance without the mandate of the people” and the “questioned law violates the constitutional provision that the state shall guarantee equal access to opportunities for public service.”

Macalintal is not questioning the provisions of the law insofar as the Sangguniang Kabataan is concerned as “SK membership is a mere statutory right conferred by law and that Congress may amend at any time the law to change or even withdraw the statutory right.”

After the law was signed, Comelec chair George Garcia said they would always adhere to what the law dictates.

“As far as the Comelec is concerned, this (postponement) is a political decision. We reserve this to the wisdom of our executive and legislative. The Comelec is merely the administering arm of the government, meaning, we administer the election, we execute the decisions of the political departments,” he said in an interview.

The Comelec welcomed the petition filed by Macalintal.

Garcia said the decision of the High Court will be the basis if there will be a postponement or moving of the elections in the future.

“What Atty. (Romulo) Macalintal did is a good development. From now on, if our Supreme Court has a definitive ruling, in the next events if there is a postponement or reset of the election, this case will be our basis,” Garcia said.

Garcia noted that ruling on the petition filed by Macalintal will also determine if Congress has the power to move or postpone electoral exercises.

“It’s high time to have an interpretation of the Constitution. Does Congress have the power to postpone elections? Number 2, does the postponement intentionally include the Barangay and SK or is it just limited to other positions? It’s good that there is an interpretation in that provision,” he said.

Spokesperson John Rex Laudiangco said the “Comelec will always abide by the law and the wisdom of the highest court of the land.”

He added they are prepared to hold the polls in December.

“As we have always emphasized before, the Comelec will be ready to conduct the elections in December 2022 pursuant to RA No. 11462 (BKSKE law) should the Highest Court rule against RA No. 11935, or otherwise hold the BSKE in October 2023 pursuant to the latter, without a single centavo of preparations wasted, true to our word as we endeavor to faithfully fulfill our constitutional mandate,” he said in statement.

In separate statements, Senators Jinggoy Estrada, Francis Escudero, and Imee Marcos said Congress is mandated to authorize the postponement, saying it is not the first time that a reschedule happened.

The succeeding BSKE in May 2020 was reset to December 5 this year.

“It is the constitution that vests in Congress the power to determine the terms of barangay officials,” Marcos said.

The SC had ruled in favor of a similar issue, according to Escudero.

Estrada said the BSKE postponement has happened in different administrations before the enactment of RA 11935.

“In a democratic society, everyone has an equal say on any issue, especially on the application of the law. Ang pagsampa ng petisyon sa Korte Suprema ay patunay na nanaig ang demokrasya sa ating bansa (The petition before the Supreme Court shows that democracy prevails in our country),” he said. (PNA)