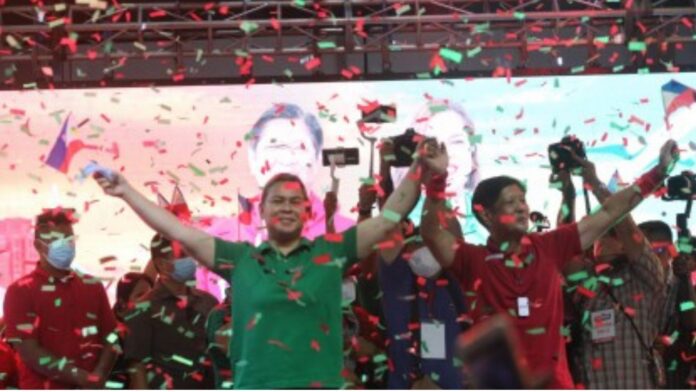 According to the most recent Pulse Asia Survey, former Senator Ferdinand “Bongbong” Marcos Jr. and Davao City Mayor Sara Duterte are the most favored presidential and vice-presidential candidates in the forthcoming May 9 elections.

Pulse Asia Research Inc.’s “Ulat ng Bayan” nationwide survey, conducted from March 17 to 21, found that 56 percent of qualified Filipino voters would vote for Marcos as president if elections were held within the survey period.

“The ex-lawmaker’s presidential bid is supported by near to sizeable majorities across geographic areas and socio-economic classes (48 percent to 64 percent and 52 percent to 56 percent, respectively),” Pulse Asia said.

Marcos’ voter support, on the other hand, fell by 4 percent, while his closest competitor Vice President Leni Robredo received 24 percent, a 9 percent increase over the February poll.

“The other presidential contenders register voter preferences of at most 8 percent. Additionally, 1 percent of likely voters are still undecided about whom to vote for as president, another 1 percent are not supporting any candidate for the post, and 0.5 percent refused to identify their preferred presidential bet,” according to Pulse Asia.

“If their original choice for president does not pursue his/her candidacy for whatever reason, 23 percent of likely voters would instead vote for Manila Mayor Francisco Domagoso,” it added.

Meanwhile, Duterte maintained his commanding advantage of 56 percent, with the presidential daughter’s voter favor increasing by 3 percent since the February poll.

According to Pulse Asia, Duterte is also the preferred vice-presidential candidate across geographic areas and socioeconomic groups, with 44 percent to 83 percent and 55 percent to 63 percent, respectively.

According to the same poll, broadcaster Raffy Tulfo and former senator Loren Legarda continue to dominate the senate contest, with 65.6 and 58.3 percent voter preferences, respectively.