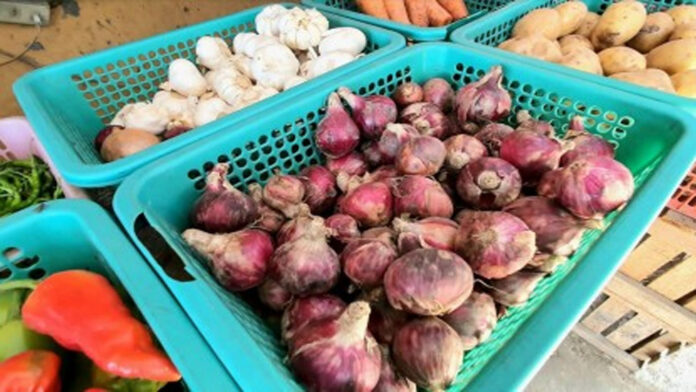 The Department of Agriculture (DA) on Sunday said it is considering selling government-seized onions at Kadiwa ng Pasko sites to ease the burden of Filipinos amid the rising onion prices that go as high as PHP300 per kilo.

In an interview over DZBB, DA deputy spokesperson Rex Estoperez said DA Undersecretary Domingo Panganiban told him that they would consider selling the onions should they be found in compliance with phytosanitary import requirements.

“Marami sila nahuli. Ang tanong namin ‘yan ba pag nilabas natin sa merkado at saka Kadiwa, legal o maayos ba ‘yan? So bago natin ilalabas ‘yan tingnan muna kung safe ‘yan o hindi…May phytosanitary inspection tayo eh (They seized a lot of onions. But the question is, are they legal or safe if we choose to release them in markets and Kadiwa? So before we release them we have to check if they’re safe…We have to subject them to a phytosanitary inspection first),” he said.

Consumers could buy onions at PHP170 per kilo at Kadiwa sites. To date, there are nearly 400 Kadiwa sites nationwide.

Estoperez said although the agency might eventually resort to importing onions, it will have to strike a balance between the interests of consumers and producers.

He also warned unscrupulous producers and middlemen against unfairly jacking up onion prices.

Estoperez said a slight increase in the prices of onions and other agricultural products was fine as long as this was fair.

On Saturday, the DA announced that some 100 metric tons (MT) of misdeclared white onions amounting to PHP30 million were seized at the Manila International Container Port.

At least 1,000 bags of white onions were also confiscated from a warehouse on Sto. Cristo Street in Tondo, Manila on Friday.

Meanwhile, Estoperez said the DA is assessing whether Kadiwa sites could also start to welcome producers selling meat and fish.

“Ang problema natin (Our problem is) we cannot man yung Kadiwa ng baboy at isda (Kadiwa stores selling pork and fish). Siguro kung may private sector na magpartner sa atin na mayroon silang mga cold storage na nakatutok dun, baka pwede (But perhaps if we can partner with the private sector who can provide cold storage, maybe we can do it),” he said.

The Kadiwa ng Pasko caravan is an initiative of the Office of the President and led by the DA to promote affordable and high-quality products.

The program gives consumers the opportunity to buy affordable goods and provides a market to local agricultural producers as well as micro, small and medium enterprises. (PNA)