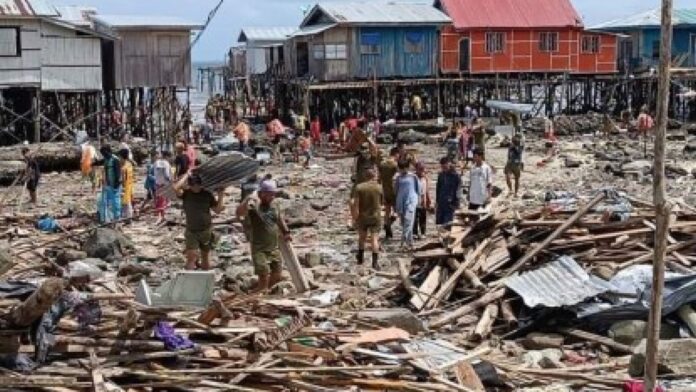 Department of the Interior and Local Government (DILG) Secretary Benjamin Abalos Jr. on Monday brushed off claims that the national government had neglected Mindanao, particularly the Bangsamoro Autonomous Region for Muslim Mindanao (BARMM), during the onslaught of Severe Tropical Storm Paeng.

The BARMM has its own government structure which has its own funding and agencies that are independent from the national government.

Abalos said the department is also closely working with BARMM regarding the status of the search, rescue and retrieval operations and the management of the dead and the missing.

“Tinatanong nga namin kahapon kung ano ang kailangan nila, ang sabi ng taga-BARMM, ay wala raw silang kailangan pa sa ngayon. They would exhaust all their resources kung meron saka raw sila magsasabi (Yesterday we asked them what they need, the person from BARRM said, they don’t need anything for now. They would exhaust all their resources first after which they will ask for help if the need arises),” Abalos said

Abalos also pointed out that relief packs and 30 desalination machines were sent even if BARMM officials have yet to seek assistance from the national government.

Abalos said the DILG is also working with concerned national government agencies to respond to affected families and mitigate the loss of lives and damages to property.

“Further, the Department is closely coordinating with the Ministry of the Interior and Local Government of the BARMM which is now under a state of calamity to help them access their calamity funds to provide assistance to the affected families,” he added.

He added that the national government needs to decipher if all the areas affected by Paeng need to be placed under a state of calamity.

Abalos explained that funds are needed for the rehabilitation and repair of damaged structures in case an area is placed under a state of calamity.

The National Disaster Risk Reduction and Management Council (NDRRMC) announced on Sunday that it has submitted a resolution recommending a declaration of a national state of calamity which will trigger a price freeze and will allow the release of emergency funds.

The declaration will allow access to calamity response funds and will implement a price freeze on basic goods.

Under the Philippine Disaster Risk Reduction and Management Act, the declaration of a state of calamity imposes price caps on basic necessities and prime commodities and requires agencies to monitor and stop overpricing, profiteering and hoarding of food, medicines and fuel.

As of posting time, the NDRRMC said the number of damaged houses stood at 4,188 worth around PHP12.42 million, 37 damaged infrastructure that costs PHP757.84 million, and agricultural damage was pegged at over PHP435.46 million. (PNA)