House Ready To Pursue Marcos’ Legislative Priorities In His SONA 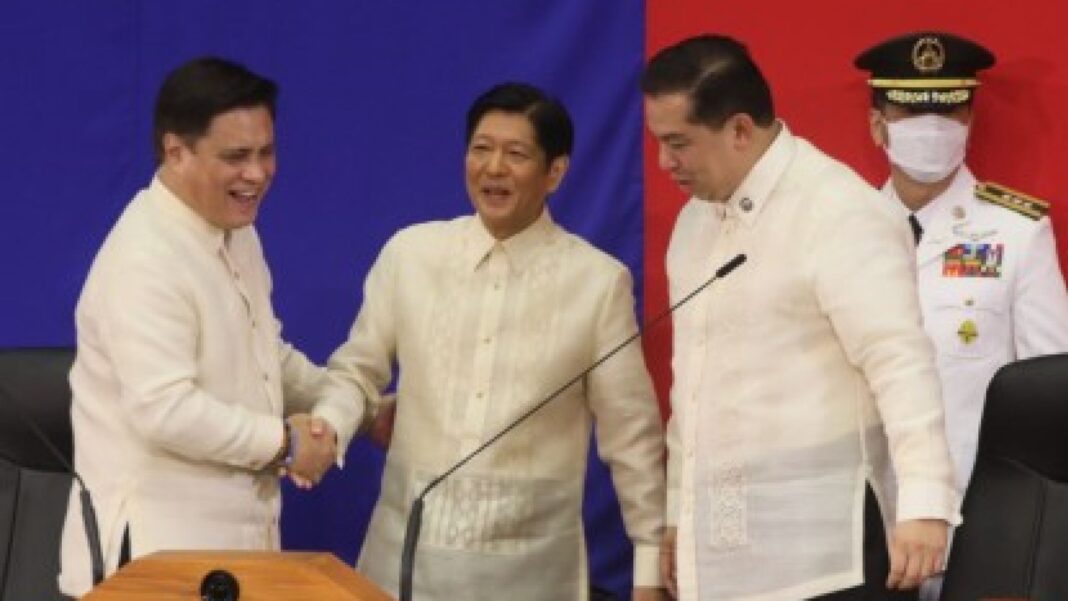 Lawmakers at the House of Representatives on Monday expressed readiness to help President Ferdinand Marcos Jr. in pushing for the passage of his priority legislative measures.

“We, in the House of Representatives, expect to buckle down to work the soonest time possible in order to make President Marcos’ vision of a better nation a reality,” Romualdez said.

Romualdez lauded the President for clearly spelling out a roadmap of governance in his six years of office in his maiden SONA.

“His message was crystal-clear: the main focus of his administration will be economic recovery, with agriculture as the major engine for growth and employment,” he said.

He said the House is also committed to help Marcos bring down the cost of farm inputs, including fertilizers, pesticides, and seeds.

“President Marcos was spot on in identifying the major cause of low production in agriculture and high prices of agricultural goods, which is the high cost of inputs,” he said.

Davao City Rep. Isidro Ungab said the lower chamber, under the leadership of Romualdez, will be “resolved and committed” in pushing for priority legislation that will drive the country towards economic recovery and improve the welfare of the people.

“With the leadership of Speaker Martin Romualdez, the House of Representatives is ready to help PBBM in pushing for the enactment of laws that will bring our nation to economic recovery and achieve the remarkable plans and programs he cited in his SONA,” Ungab said.

Ungab said Marcos presented a clear direction with the plans he outlined at his first SONA, noting that the President was able to tackle the ways in dealing with the economic challenges the country is facing.

“I say, he indeed delivered a concrete and achievable path for economic recovery,” he said, adding that Marcos laid out how the Department of Finance’s Medium-Term Fiscal Framework and the government’s updated medium-term macroeconomic assumptions and fiscal program and growth targets for fiscal year 2022 to 2028 will be realized.

Apart from fiscal policies, Ungab also took note of Marcos’ plans for the agriculture sector and for the agrarian reform program.

Ungab also highlighted Marcos’ goals to provide swift delivery of social services and aid, his goal to bring an efficient and quality education program, the plan to reinstitute the mandatory Reserve Officers’ Training Corps (ROTC); to improve healthcare services; expand the infrastructure program of government; and increase energy production, among others.

“These are impressive, concrete plans, and we must all work together for these to be achieved,” Ungab said.

Quezon City Rep. Franz Pumaren, meanwhile, welcomed Marcos’ legislative wish list as “something that best describes his determination to steer the country into reversing the unfortunate effects of the pandemic catastrophe.”

“President Ferdinand Marcos Jr. may have given us in Congress a lot on our plate but under a tried and tested leadership such as that of Speaker Ferdinand Martin Romualdez, expect the House of Representatives to deliver,” Pumaren said.

Pumaren said the President’s “deep sincerity” in helping the nation serves as an inspiration for Congress to act accordingly.

“His focus on our economy, health and educational systems give us great optimism moving forward. We must swiftly pursue passage of the legislative measures the earliest time to make this possible,” lawmaker said.

Pumaren expressed confidence that with Speaker Romualdez at the helm of the Lower House, the executive department has nothing to “worry about.”

Salceda, incoming chair of the House tax panel, said he commits to “begin taking up all the tax-related bills” mentioned by Marcos as soon as they are constituted as a committee.

“We will be on our feet on day one,” Salceda said.

Fiscal management measures mentioned by President Marcos include the National Government Rightsizing Program, the Budget Modernization Bill, Package 3 of the tax reform on real property valuation and assessment, and Package 4 of tax reform on passive income and financial intermediaries.

At the beginning of his speech, Marcos also mentioned tax administration reforms such as the Digital Economy VAT Law, the Ease of Paying Taxes Act, and reforms against possible undervaluation and misdeclaration of imported goods.

“These are very clear directions from the President, who is head of the governing coalition that the House majority belongs to,” Salceda said.

Salceda said he would be filing a joint resolution on the Medium Term Fiscal Program, which will likely be the basis for the general principles of the budget.

Salceda also thanked President Marcos for his commitment to complete all rail projects already ongoing from the time of previous President Rodrigo Duterte.

“Although it was not mentioned perhaps due to the fact that we are negotiating the terms of the financing, the Bicol Railway is already in the advanced stage of pre-project work, and is an ongoing Build, Build, Build priority. So, I’m thankful for his commitment to finish what PRRD started,” he said.

These landmark health reform measures include the establishment of the “Philippine Center for Disease Prevention and Control (CDC) Act” (House Bill No. 281); “Virology Institute of the Philippines (VIP) Act (HB 282); and “Medical Reserve Corps Act” (HB 285).

Tan said the immediate enactment of the CDC into law is urgently necessary as the country, just like most of health systems in the world, is ill-prepared to address the challenges of pandemics such as the Covid-19.

“The bill seeks to modernize the country’s capabilities for public health emergency preparedness and strengthen the current bureaucracy that is mandated to address communicable diseases in the country through organizational and institutional reforms”, Tan said.

To better prepare against public health emergencies, he also pointed out the need to embark on health modernization and institutional reforms.

“We cannot keep on rearranging the boxes in our health organization without capacitating our health personnel and resources. The modernization and reorganization of our health system must go hand in hand to protect the public from health risks”, he said. (PNA)