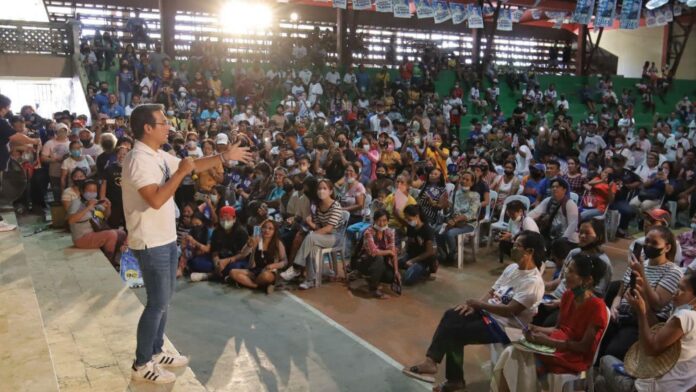 Aksyon Demoratiko standard-bearer Francisco ‘Isko Moreno’ Domagoso believes that the natural gas in the Mindanao region could be the solution to the country’s fuel problem.

In an ambush interview during his campaign sortie in Roxas, Oriental Mindoro on Thursday, Domagoso said the Liguasan Marsh in Maguindanao could help the country obtain stable fuel sources, thus becoming self-sufficient in terms of fuel products.

He noted that the current cost of fuel and petroleum products is so high that it already affects the transportation of products from one area to another.

“Yesterday, when we were in Mindanao, I think Mindanao is the solution of the country’s problem with regard to, sa kinakailangan nating source of energy kasi yung Liguasan Marsh ay napatunayan na na merong methane at ito’y pwedeng hanguin at merong pag aaral na sa ilalim nito ay mayroon dung langis na pwedeng I explore so ako naniniwala na baka ito na ang sagot sa ating bansa (our need for source of energy because the Liguasan Marsh has been found to have methane that can be harnessed, and there is a study that there is also oil beneath it that may be explored, so I believe that this may be the answer to the country’s problem),” Domagoso said.

During his visit to Iligan on Wednesday, Domagoso vowed to develop the natural gas deposit in Liguasan Marsh.

A government survey showed that the area beneath Lake Buluan in Maguindanao’s Liguasan Marsh contains an estimated 68 billion cubic feet of gas worth at least USD1 billion or PHP52 billion.

It is also believed to contain oil and coal if deeper digging or exploration is made.

Liguasan Marsh, Domagoso said, could save the country in terms of fuel sources especially when a crisis occurs or incidents such as the Russia-Ukraine conflict and the explosion of an oil plant in the Middle East.

He said an initial amount of PHP2 billion is needed to initially explore the Liguasan Marsh for a clearer estimate of how much natural gas, and even oil, is deposited under the 220,000-hectare wetland that borders the provinces of Maguindanao, North Cotabato, and Sultan Kudarat. (PNA)