Lorenzana Thanks PRRD For ‘People-Centered Leadership’ 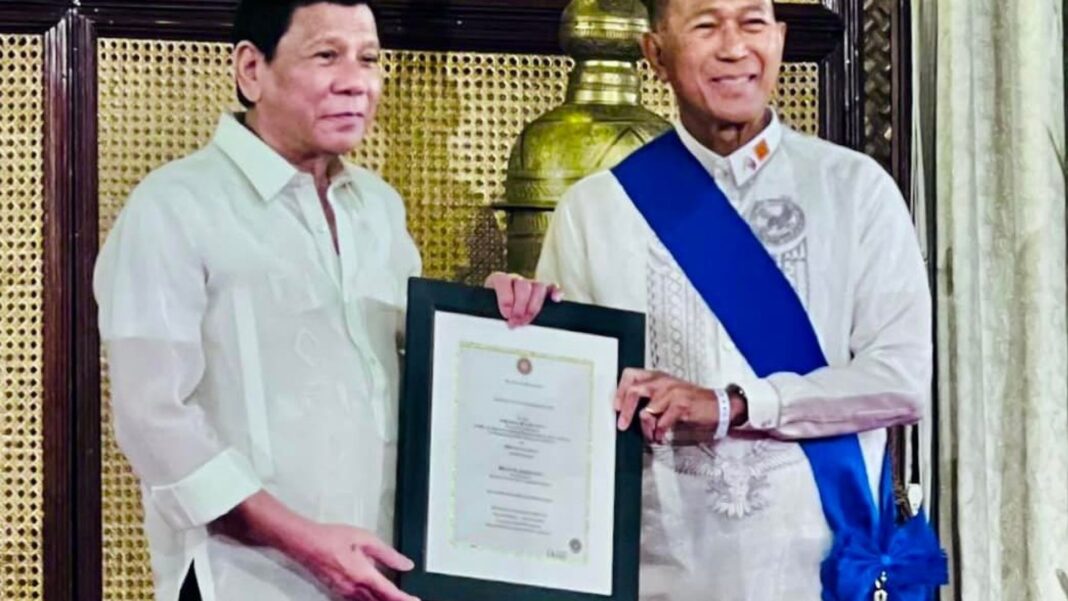 In a Facebook post, outgoing Department of National Defense (DND) Secretary Delfin Lorenzana said he is honored to have worked with President Rodrigo Duterte whose leadership he described as “people-centered.”

“Thank you, PRRD, Sir! It’s both an honor and a privilege to serve the nation under your exceptional and people-centered leadership,” he wrote.

On June 16, Lorenzana received an award from Duterte for playing a vital role in the country’s pandemic response.

“In a simple ceremony last June 16, President Duterte awarded me the Lakandula Award – degree of Grand Cross for serving as Chairperson of the National Task Force Against Covid-19 (NTF-Covid-19). I humbly received the award on behalf of the men and women of the NTF-Covid-19 who worked tirelessly and efficiently in the fight against the Covid virus,” he wrote in the same post.

Lorenzana is the 36th National Defense Secretary. After more than four decades of service in defense and foreign relations, he brought to DND his expertise in national defense and security, strategic leadership, public diplomacy, foreign military affairs, special operations, and veterans affairs.

Lorenzana is a graduate of the Philippine Military Academy Class of 1973. He earned his post-graduate degree of Master of Business Administration, major in Operations Research, from the Ateneo Graduate School of Business. He also completed several courses and training programs at the Australia University in Canberra, Harvard University, and the United States Department of State.

Lorenzana previously said the Duterte administration worked hard for the country to procure a credible defense posture to protect its vast maritime territories.

Under the Duterte administration, the DND also advanced good governance policies, one of which is Republic Act No. 11709. The law mandates that only the best officers in the AFP can assume the highest posts in the military. Lorenzana said that during his term, the AFP launched sustained operations against the communist insurgents and violent extremists, weakening the pressing security threats.

“The DND, through the AFP, sustained operations that led to the weakening of the communist terrorist group and revitalization of the government’s reintegration program for former rebels and violent extremists. Since 2016, thousands of rebels, violent extremists, and their supporters have returned to the fold of the law, resulting in a major loss of their ground-level support,” he said.