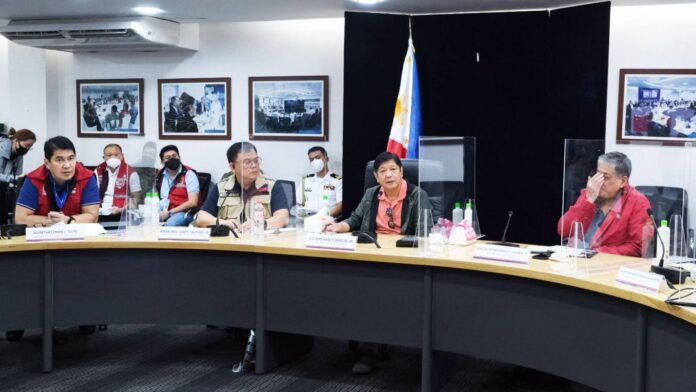 Energy Secretary Raphael Lotilla revealed during a situation briefing with senior government officials at the National Disaster Risk Reduction and Management Council headquarters in Quezon City that in addition to Nueva Ecija and Aurora, other provinces experiencing issues with the supply of electricity include Tarlac, Zambales, Pampanga, and Quezon.

Although the typhoon spared the main generation plants, numerous localities are still largely without electricity, according to Lotilla.

For his part, Marcos admitted that it will take some time before power is fully restored and instructed the Energy to implement “stopgap measures” including deploying more fuel-powered generators.

We need to send them power, Marcos said, “But as a response already, since I’ve already identified that the whole of Nueva Ecija and the whole of Aurora have no power.”

In order to avert widespread flooding, he also urged the National Irrigation Administration and the Metropolitan Waterworks and Sewerage System to exercise caution when releasing water from the Ipo and Magat dams.

“Bantayan ninyo mabuti (Keep a good eye on them). We don’t want that incident to happen na sabay-sabay nagbitaw, hindi nag-warning sa mga affected areas na magbibitaw ng tubig kaya nagkaproblema (they both released water without warning in affected areas that’s why it became a problem). You be very very careful about that,” he advised.

Due to Typhoon Ulysses’ extensive flooding, the province of Cagayan was declared in a state of calamity in November 2020.