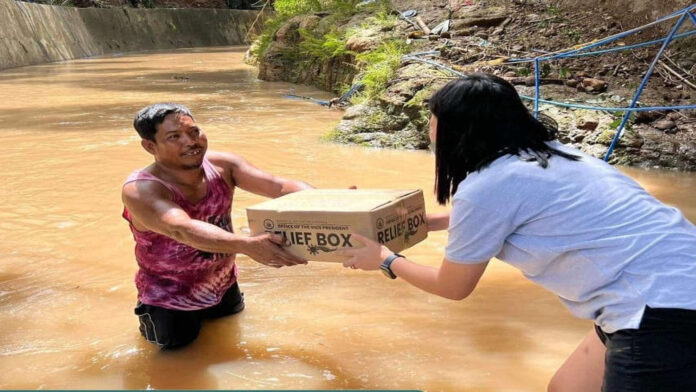 The office of Vice President Sara Duterte has distributed relief assistance to families in flood-affected areas in Zamboanga City, following heavy rains due to the shear line on Christmas weekend.

A shear line is an area in the atmosphere where warm and cold winds meet, causing rain clouds to form.

In a statement on Tuesday, the OVP-Disaster Operations Center (DOC) said it reached affected families in remote areas Sunday night.

“Families from Barangays Putik, Cabuluay, Culianan, Pasolobong, and Boalan received the said relief packages from the OVP-DOC on Sunday. But due to heavy rain, the distribution of relief boxes in Barangay Tumaga was conducted on the morning of December 26,” it said.

The Vice President, in her Facebook post, said the OVP-DOC worked closely with national and local government agencies for the immediate delivery of relief goods.

The OVP-DOC, meanwhile, said over 400 residents are staying in several evacuation sites in Zamboanga City.

The Zamboanga City LGU said there are currently eight evacuation centers in the city in the aftermath of the flooding.

Latest data from the National Disaster Risk Reduction and Management Council said the death toll has increased to 13, one of which was from Zamboanga. (PNA)