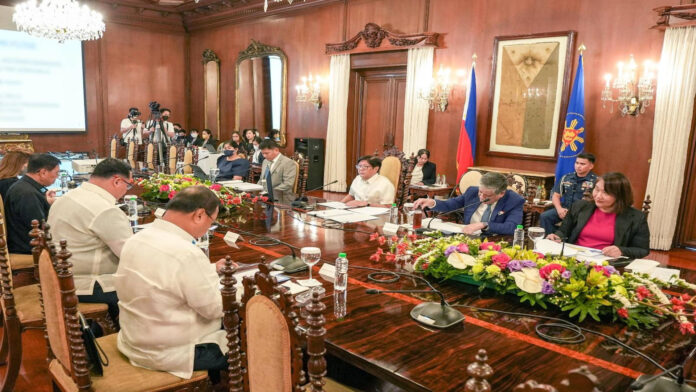 President Ferdinand R. Marcos Jr. has expressed optimism that Congress will fast-track the passage of his administration’s priority measures, Malacañang said on Wednesday.

This, after Marcos convened a meeting with Presidential Legislative Liaison Office (PLLO) officials led by Secretary Mark Llandro Mendoza at Malacañan Palace in Manila on Tuesday to discuss the administration’s legislative priorities.

The meeting agenda includes the legislative calendar and accomplishments, updates on bills covered by Presidential certifications or directives and other PLLO-related concerns, state-run Radio Television Malacañang (RTVM) said in a Facebook post.

Marcos was satisfied with the progress of his priority bills and hopeful that they will be passed into law to support his development agenda, Communications Secretary Cheloy Garafil said in a statement.

“President Marcos enumerated the priority bills in his 2022 State of the Nation Address (SONA), which are essential in the implementation of the administration’s plans and programs for the country, particularly the 8-point socioeconomic agenda,” she said.

Citing the PLLO’s report, Garafil said around 10 of the 20 priority legislative measures mentioned in Marcos’ first SONA have already been passed by the House of Representatives and transmitted to the Senate, as of Jan. 18.

Garafil noted that the bills approved on the third and final reading by the House of Representatives were the proposed Tax Package 3 or Real Property Valuation and Assessment Reform Act; the proposed Tax Package 4 or Passive Income and Financial Intermediary Taxation Act (PIFITA); and the Government Financial Institutions Unified Initiatives to Distressed Enterprises for Economic Recovery (GUIDE) bill.

She said the Internet Transactions bill, the proposed E-Commerce Law and the bill condoning the agrarian reform beneficiaries’ unpaid amortization and interests of loans likewise secured the House lawmakers’ nod.

She added that the proposed amendment to the Build-Operate-Transfer (BOT) Law and the planned creation of the Medical Reserve Corps, the Philippine Centers for Disease Prevention and Control (CDC) and the Virology Institute of the Philippines were also among the Marcos administration’s priority legislations.

Garafil said several bills certified as urgent by Marcos and other Legislative Executive Development Advisory Council (LEDAC)-priority bills have already been passed by the House of Representatives but are still pending in the Senate.

“Those being pushed by the Palace based on the President’s directives include the Maritime Industry Authority (MARINA) Regulatory Functions, Amendment to RA No. 8172 or ASIN Law Amendment, Regional Comprehensive Economic Partnership (RCEP) (for Senate ratification), and Anti-Agricultural Smuggling Act,” Garafil said.

Garafil said the remaining 10 SONA priority bills are still at the committee levels in both the Senate and the House of Representatives.