PDP-Laban Expresses Sure Win Both Local And National 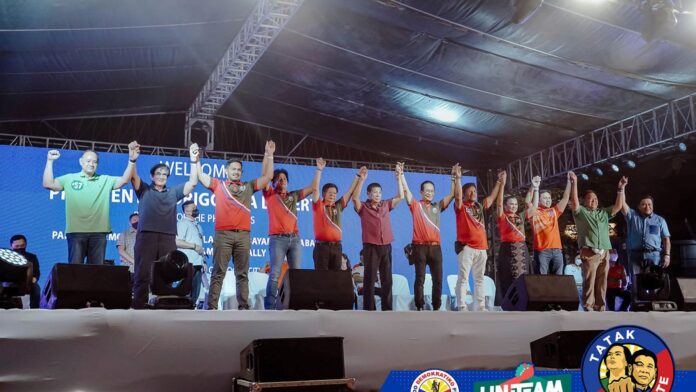 The Commission on Elections (Comelec), in its Resolution 10787, delegated the Partido Demokratiko Pilipino-Lakas ng Bayan (PDP-Laban) for being the most ruling for getting the highest weighted average points of 55.74 on this year’s polls as issued last Wednesday.

As said, Partido Demokratiko Pilipino-Lakas ng Bayan (PDP-Laban) is confident for a sure win this coming May 9 elections.

“We are very grateful for the timely decision of the Comelec naming us the dominant majority party for this May 9 elections. It is really good to know that we outclass all the other political parties based on the six standards of the Comelec, which is a very comprehensive assessment and measurement of the comparative strength of our parties today,” he said.

“With this, the party expects to finish strong as we enter the last few days of the campaign. We are confident of the victory of our national and local candidates nationwide,” PDP Laban president and Energy Secretary Alfonso Cusi said in a press statement.

Cusi welcomed the Comelec’s decision, on which is certain that PDP Laban, dominant majority party’s over other political parties.

The ruling party’s score was based on the computation using a six-point criteria, including the established record of the parties; the number of incumbent officials belonging to the party; the established chapters nationwide; the ability to field a slate of candidates nationwide; the number of women candidates; and the relative organization and strength.

The PDP-Laban who has members including President Rodrigo Duterte out of the 5,384 incumbent other officials and a ruling party is entitled for the fifth copy of the election returns and the seventh copy of the certificates of canvass and to mention will receive electronically-transmitted precinct results and is allowed to assign official watchers in every polling place and canvassing center

Meanwhile, the PDP-Laban’s “Solid 5” senatorial candidates Salvador Panelo, Greco Belgica, Rey Langit, Astra Pimentel, and Robin Padilla also welcomed the Comelec’s decision and vowed to do their part to protect the integrity of elections. Also mentioned that it will be “honest, peaceful, and credible elections” on May 9.

Panelo, who served as chief legal counsel of Duterte, ensured that the PDP-Laban would continue to be transparent and vigilant.