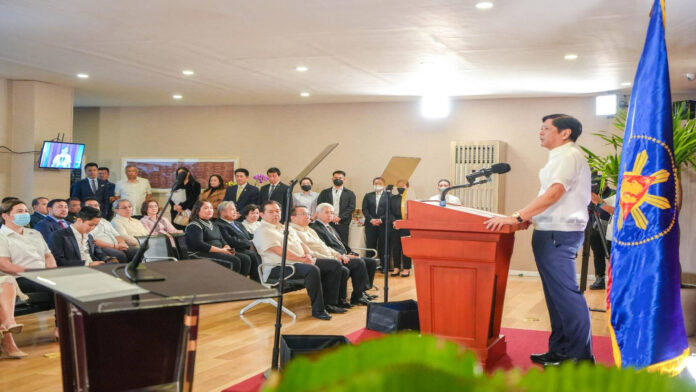 President Ferdinand R. Marcos Jr. has welcomed the Philippines’ inclusion in the “VIP Club” or a list of Southeast Asian countries with best-performing economies as tagged by economic leaders at the World Economic Forum (WEF).

In a news release from Malacañang on Sunday, Marcos said the Philippines’ participation at the WEF in Davos, Switzerland served as an excellent platform to showcase the Philippine economy’s strong performance.

“Mabuti naman at nakapunta tayo rito, dahil sa pagpunta natin, nasama tayo sa tinatawag nilang VIP Club… ‘Yung VIP Club ay Vietnam, Indonesia and Philippines. Yun daw ang pinakamagandang ekonomiya sa Asya (It’s good that we came here, because when we went, we joined what they call the VIP Club… The VIP Club is Vietnam, Indonesia and the Philippines. It is said to be the best economies in Asia),” Marcos said in an interview.

Marcos met with global leaders at the global forum, with several foreign investors expressing intent to explore business opportunities in the Philippines.

Among them was WEF Founder and Chairman Emeritus Klaus Schwab, whom Marcos considers “a dear friend of the Philippines.”

The two discussed partnerships and collaboration to help the Philippines sustain equitable and inclusive growth and provide a better quality of life for Filipinos.

He underscored the administration’s policies, including the Philippine Development Plan, the 8-Point Socioeconomic Agenda and “various other policies and legislations that spotlight the economic reforms of the Philippines that have led to its sustained growth.

He also made a soft launch of the country’s first-ever sovereign wealth fund during the Philippines’ Country Strategy Dialogue at the WEF.

In his arrival speech after participating at the WEF, Marcos said his participation in the global forum was to highlight the new economic situation and policies in promoting the Philippines and learn from the world heads and the world economic leaders.

“That was the main theme in this entire forum. [It] is how we bring back cooperation in a fragmented world. And we are seen to play a part in that and especially as a member state of ASEAN (Association of Southeast Asian Nations) and as a leading economy in Asia,” he said in a speech at the Villamor Airbase in Pasay City on Saturday. (PNA)