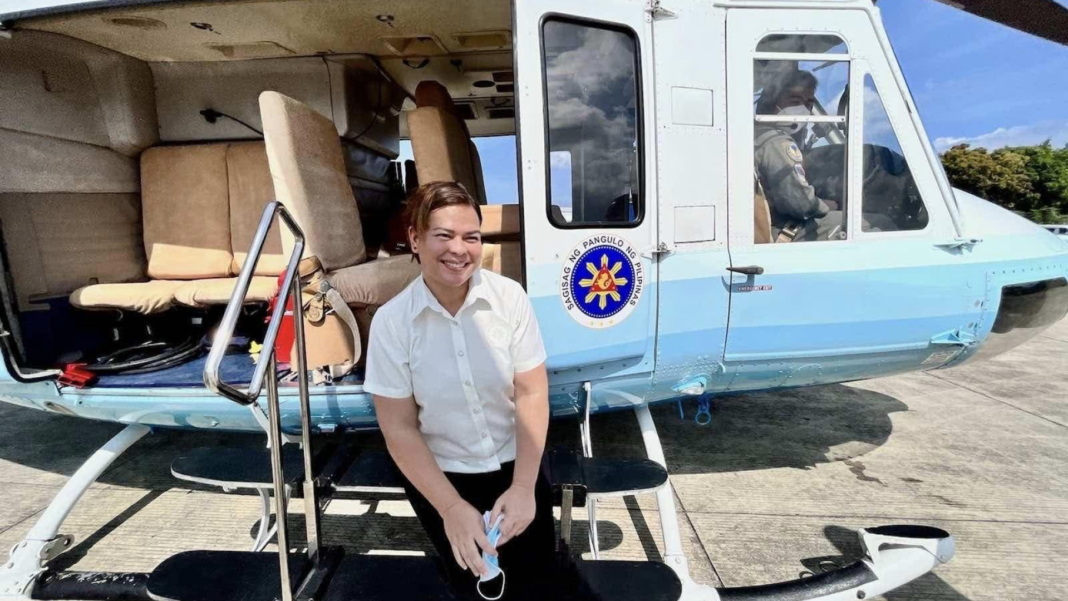 Vice President and Education Secretary Sara Duterte on Thursday addressed allegations that she was using a presidential aircraft for her “personal Manila-Davao City trip” on a daily basis.

In a statement, Duterte said she hoped the person behind the malicious claim would “reflect” on his lies.

“I believe that a person who can conjure a lie from an appreciation post — that a helicopter is being used to go home every day, even giving in to the itch of maliciously suggesting that it is for personal use — should seriously reflect on why he had to lie,” she said.

She insisted it was an appreciation post intended to express gratitude to President Ferdinand “Bongbong” Marcos Jr. for supporting both her official and personal duties as a mother.

Duterte also thanked the presidential team for their “tireless” work, like “hopping from one island province to another” just to visit Filipinos.

Amid the issue, the Vice President advised the person behind the claim to “recognize his anger and overcome bitterness.”

“I think that if this person can recognize his anger, he will be able to overcome his bitter and spiteful self. Hopefully, he becomes a better version of himself — despite the cycle of hate that has enslaved him,” she said.

The OVP, meanwhile, said it is now looking into the possible filing of criminal charges against those spreading the false claim.

“Pinag-aaralan ho namin ‘yan, kung magku-qualify ‘yan sa isang kriminal na kaso, kasi marami rin hong naloko at nalinlang ang ganyang post. At alam naman ho nating ‘pag pinabayaan nating mag-propagate po ‘yan, minsan naniniwala ‘yung taong bayan (We are studying it, if it will qualify to criminal charge because many have been deceived by such deceitful posts, and we know that if we allow this to propagate, the general public may be swayed)” said OVP Spokesperson Reynold Munsayac in a video statement.

Munsayac sent the video in a Viber thread with reporters, reiterating that the online speculations were just “fake news.”

This still pertains to the birthday greeting and appreciation post of Duterte for Marcos, where she thanked him for allowing her to use the presidential aircraft (250th presidential airlift wing).

During the press briefing, Munsayac said it was “improbable” for the aircraft itself to take long-range travel, particularly the Manila-Davao City route.

Munsayac also reiterated there is no need for Duterte to travel to and from Davao City, since she’s now based in Manila, with her family.

Duterte, meanwhile, spent her Thursday joining residents of Bulacan in commemorating the 124th anniversary of the opening of the Malolos Congress, where she highlighted its historical relevance to the country’s democracy.