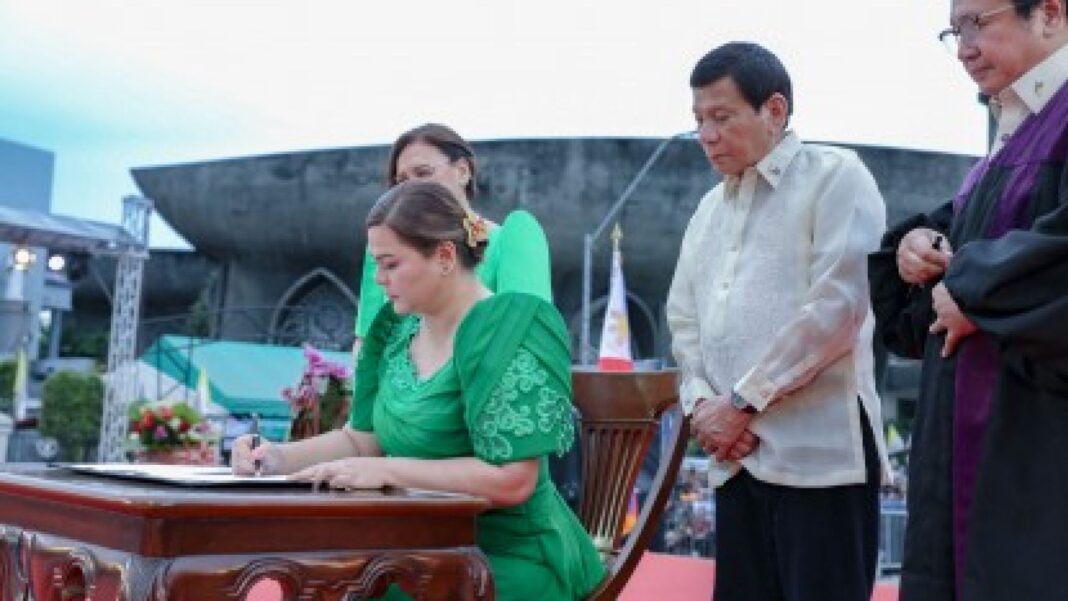 Sara Duterte took her oath as the Philippines’ 15th Vice President at San Pedro Square in Davao City on Sunday.

Duterte took her oath before Supreme Court Associate Justice Ramon Paul Hernando, and held her inauguration in her hometown where she is the outgoing mayor.

President Rodrigo Duterte and Elizabeth Zimmerman stood by her side when she took her oath. Also present were President-elect Ferdinand Marcos, Jr.; his wife, Louise Araneta-Marcos; and former President Gloria Macapagal-Arroyo. Officials of various embassies and other incumbent and elected lawmakers joined the ceremony.

“When I committed myself to governance and public service, I was also determined to finish three consecutive terms as mayor. That will not happen anymore. I am now the Vice President-elect,” Sara Duterte said in her speech.

She considered the work and life of Dr. Jose Rizal, the national hero whose birth anniversary was being commemorated on June 19, as those which have taught her that “selflessness and sacrifice could change the country’s fate and shape the children’s future.”

“May his memory light up the fire within us to become patriots. The bravery of Rizal completes the fabric of our identity as Filipinos,” she said.

Duterte urged Filipinos to show patriotism by taking care of their families and communities despite the adversities.

“May we rise together every day with the burning promise in our hearts that we love and will continue to love the Philippines as long as we live,” Duterte said.

She said that 32.2 million Filipinos made their voice loud and clear, sending a message for her to serve the country.

“And this message has been reiterated in my oath: to consecrate myself to the service of the nation. I believe the country will be heading toward a future of hope, security, strength, stability, and progress,” Duterte stated.

She expressed thanks to the guests and the public who witnessed the ceremony on Father’s Day.

“This is a time for families to celebrate but you are here with me. Happy Father’s Day to all the fathers who make sure that another person is given the best of everything,” Duterte said.

Duterte added that it is the duty of each Filipino family to stress that education begins at home and to not “squander the future of our children.”