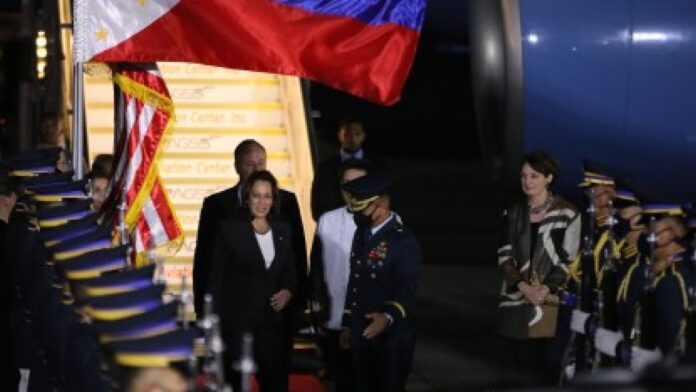 United States (US) Vice President Kamala Harris arrived in Manila Sunday night for a series of engagements, including a meeting with President Ferdinand R. Marcos Jr. and Vice President Sara Duterte as well as a trip to Palawan.

According to a senior US administration official, Harris’ meetings with Marcos and Duterte will focus on strengthening the Philippine-US security alliance and economic relationship.

She will reaffirm US defense commitments to the Philippines and the importance of their alliance in peace and stability in the South China Sea.

“They will discuss upholding international rules and norms,” the US official said in a background press call published on the official website of The White House.

Harris will also commit to work more closely with the Philippines to strengthen the two country’s economic partnership and investment ties.

“We anticipate there will be deliverables and new initiatives on this front, as well, related to the digital economy and upskilling and accelerating the transition to clean energy,” the US official added.

On Monday, Harris will meet with civil society activists as part of their continued support for human rights and democratic resilience.

She will also participate in a moderated conversation or town hall with an audience of young Filipino women.

Harris will likewise travel to Puerto Princesa, Palawan on Tuesday to demonstrate the US administration’s commitment to stand with the Philippine in upholding the rules-based international maritime order in the South China Sea.

“The Vice President will deliver remarks underscoring the importance of international law, unimpeded commerce, and freedom of navigation in the South China Sea,” the US official said.

She will also meet with residents, civil society leaders, and representatives of the Philippines Coast Guard.

“And now, in her engagement with the Philippines Coast Guard, which has benefitted from US partnership, training, and equipment, she will see firsthand the outcomes of this partnership and discuss how to strengthen it even further with new funding and initiatives,” the US official added.

Harris will be the highest-ranking US official ever to visit Palawan.

On Saturday, Marcos said he believed that Harris’ scheduled visit to Palawan would not fuel tension between the Philippines and China because it would merely be a visit to a part of Philippine territory.

“She (Harris) is in the Philippines and she is visiting another part of the Philippines. And of course, it is the closest area to the South China Sea, but it’s very clearly on Philippine territory. So I don’t think it will cause problems,” he said in a media interview on the sidelines of the 29th Asia-Pacific Economic Cooperation (APEC) Summit in Bangkok. (PNA)