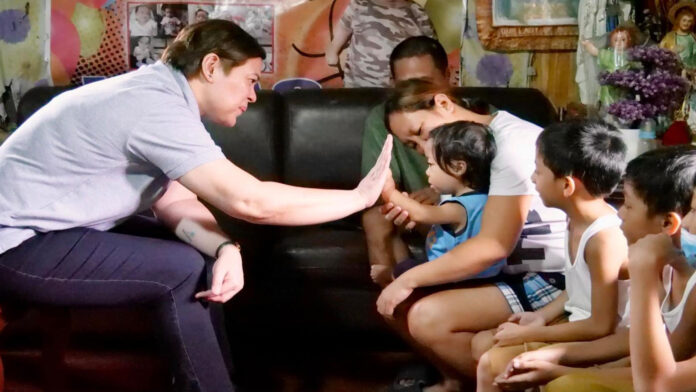 Vice President Sara Duterte visited and gave aid to a one-year-old boy with a cleft palate and a woman with brain complications in Negros Occidental and Bacolod City, respectively.

In a statement on Monday night, Duterte said the mother of the kid first met her team during the campaign period.

“Aside from a cleft palate, Acezequel also needs to undergo a colostomy,” the Office of the Vice President (OVP) said.

Duterte talked to the child’s mother to get an update on the status of his health condition since their first interaction before the polls.

“Dinalaw natin sila upang makita ang kanilang mga kalagayan at matingnan kung anong tulong ang pwede nating maiabot para sa kanilang medikasyon (We visited them to check their situation and see whatever aid they need so we can extend help for their medication),” she added.

Girlie thanked Duterte during their meeting.

“Nagpapasalamat po ako nang sobra-sobra dahil araw-araw po akong nag pray na sana may isang tao na tumulong sa aking problema para sa baby ko pero hindi ko inaasahan na dahil sa caravan nila, siya mismo, si Vice (President) Sara Duterte, yung taong ipinadala ni God para tumulong sa amin (I am very thankful because I have been praying daily for a person to help us in the problem of my baby. But I did not expect that because of their caravan, the Vice President Sara Duterte, herself, is the one sent by God to help us),” Ramirez said.

Another 40-year-old resident of Bacolod City was elated after receiving aid from the OVP.

“I am very honored that despite her busy schedule, she made sure to find the time to visit me. And my family is glad that she honored our home with her presence,” April Bangero said.

Included in her complications is a brain aneurysm, which she earlier disclosed to the OVP through email.

The OVP earlier initiated nationwide programs through the opening of its satellite offices in various areas of the country.

These programs cover basic services such as medical and burial assistance, free rides program, aid to children and learners, and legal and employment assistance through partnerships with other government agencies, among others.

The OVP said it will launch livelihood and training programs for women and members of the lesbian, gay, bisexual, transgender, queer, intersex and asexual plus (LGBTQIA+) community. (PNA)