Youth Speaks: ‘Voting’ with your Cash 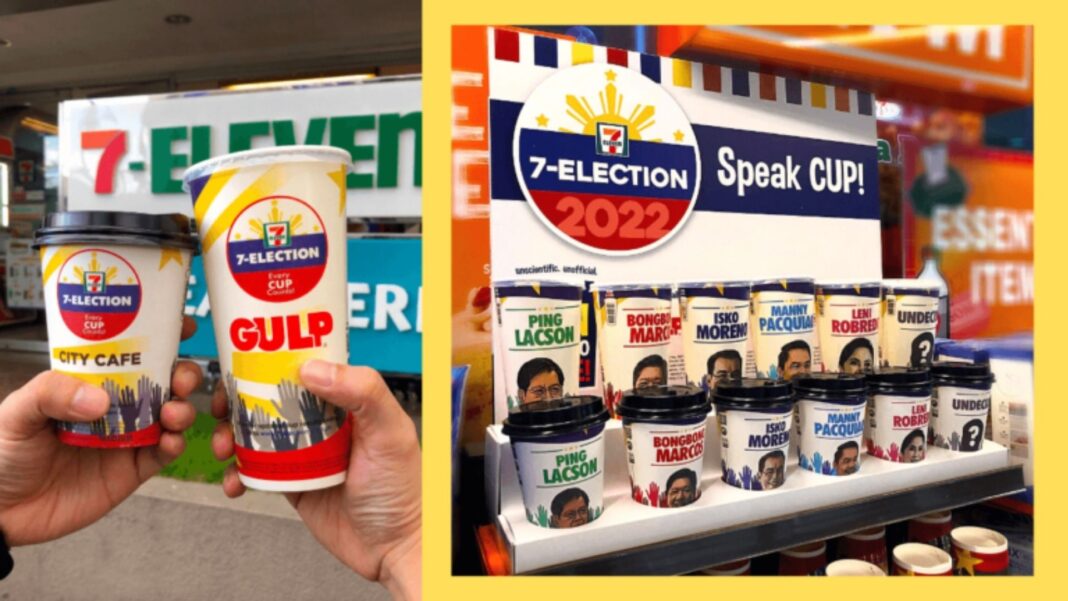 Order a Gulp at 7/11 and you’re not only confronted with a choice of Mountain Dew or Nestea but also with your choice of president through their #7Election presidential cups. Similarly, in Fruitas stalls nationwide, you have the option of getting their ‘Freshidential’ cups and grab your fruit shake in a cup proudly displaying your preferred candidate.

This phenomenon is not just limited to beverages. If you would like to publicize your vote through food, Japanese-inspired bakery Kumori also released a presidential cupcakes line. Get a dessert and show off your presidential candidate all at once!

For the apolitical and those who would like to order a soda away from any political kerfuffle, these gimmicks have started to seem like an unnecessary hassle. What if you simply wanted to enjoy a strawberry cupcake or a mango shake without the pressures of revealing your political preferences in a quite frankly polarizing election season? The question thus arises, what even is the need for these stunts?

On paper, these companies like to vaguely boast that their campaigns aid in election awareness and voters’ education efforts. According to them, this election-themed packaging help gauge Filipinos’ political stances and engage consumers to think about their electoral decisions.

A lot of these companies leverage voters’ desire to display their political loyalties, especially in election cycles as heated like this. In a more primal sense, these products allow individuals to openly associate themselves with a community of like-minded peers– prompting our need to feel a kinship with others.

For some fervent supporters, purchasing these products has become a point of pride. More than that, the results of these ‘mock polls’ (if they could even be qualified as such) are presented as if they are representative of the actual electoral field. Glance online and one may encounter numerous netizens reveling in these results as if they had come from an actual polling body, not a largely informal poll conducted by a convenience store and measured by which cup people would like to drink Sprite out of.

It does make one question if these themed products ever serve to cheapen the electoral process and the values of participatory democracy.

Although many might see it as a fun gimmick that is not actively hurting anyone, by my own personal observation, such mock polls only serve to worsen what is already a tense and divisive election cycle. Many have turned to publicly shaming those who avail of products related to their political opposition online. More than that, it directly obfuscates voters’ perception of survey results in an age where voters’ trust in polling data is at an all-time low.

The current election cycle is already incredibly hostile, regardless of which side of the political aisle you belong to. Let’s not make Gulp another thing that divides us.

LPA To Bring Rains Over Parts Of PH; ‘Luis’ To Exit PAR

Sim Registration May Be First Law To Be Signed By PBBM: Romualdez